Does adding two sounds together result in a louder sound? Not always. It depends on the phase difference between the two waves.

In this video, the two speakers are emitting sound waves of the same frequency. So between the two speakers, we have two waves travelling across different distances before they arrive and superpose at each location. 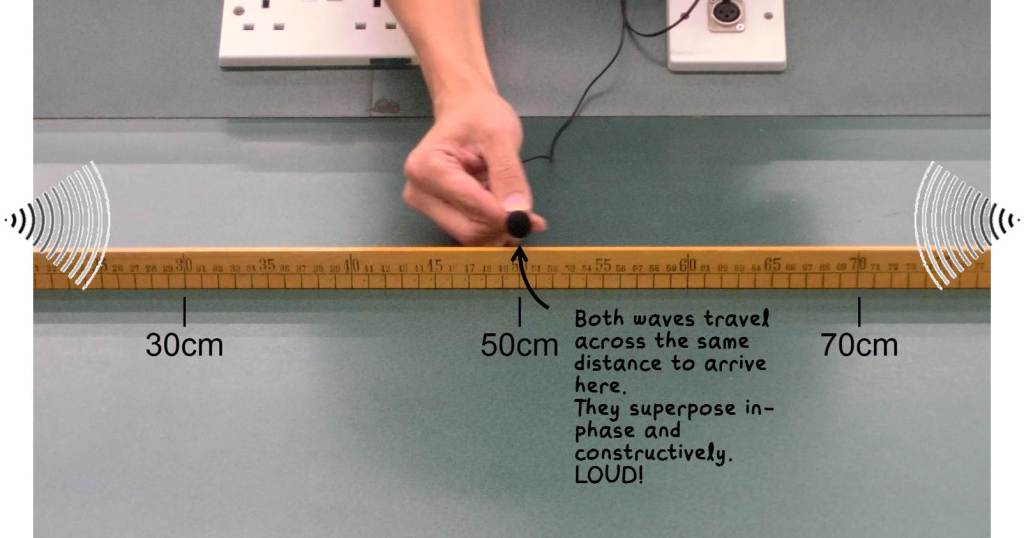 At locations where the waves arrive in-phase (pressure antinodes), they interfere constructively, resulting in an even louder sound.

At locations where the waves arrive completely out-of-phase (pressure nodes), they interfere destructively, resulting in softer sound or even silence.

In this video, one could tell that the distance between two C.I.(or two D.I.) is about 20 cm. This makes sense because the wavelength of the sound wave used was 42.5 cm (800 Hz @ 340 m s-1). Moving the microphone 20 cm increases one path by 20 cm while decreasing the other path by 20 cm. In other words, moving the microphone by λ/2 changes the path difference by λ.

2. The more observant may realize the positions of the C.I. and D.I. seem to be shifting as time progresses. This is true. The two speakers were not completely coherent and their phase relationship did drift a bit. But their phase difference was changing slowly enough for an observable interference pattern.