Because of the small value of G, (

Ignoring air resistance, calculate the required speed v0 for an object to go into orbit just above the Earth’s surface. 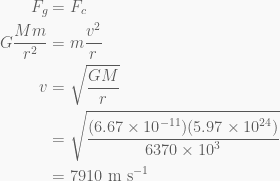 Why doesn’t the Moon Fall Down? (Alice and Bob in Wonderland)

How to Park a Satellite?

How to Calculate Orbital Speed?