In this section, we will discover the quantitative link between a gas’s pressure (a macroscopic property) and the gas particles’ mean-square-speed (a microscopic property). Buckle up. It is going to be a long but exhilarating ride.

To start off, let’s imagine a space enclosed by a cube of sides L. To keep things simple, let’s imagine that there is only one solitary gas particle of mass m travelling at constant speed v in the x-direction in this cube.

Every time it hits the right wall (shaded in green), it rebounds with speed v since an elastic collision is assumed.

During each collision, the particle undergoes momentum change of

So the average force exerted by one gas particle

Now let’s upgrade our model to having

number of gas particles. For the time being, let’s imagine that all the N particles are travelling along the x-axis.

This means that the total force exerted on the wall is

Instead of working with individual vi2 values, it is a lot smarter to work with the mean-square value <v2>. So

The pressure on the wall is thus 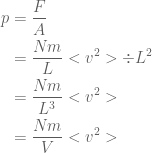 where V is the volume of the gas.

Now let’s address the elephant in the room: the gas particles are not constrained to move only long the x-axis. Each particle, instead of having a single-directional velocity vi, actually has a three-dimensional velocity

Now, the final push. Let’s replace the single-directional component vx with the 3-deminsional velocity c to. But what’s the link between c and vx?

From Pythagoras theorem, we know the magnitudes are related by

Working with statistical averages, we can write

Since the motion of the gas particles is random, we expect the speed distribution to be uniform in all three directions, meaning

Since Nm is actually the mass of the gas M, and density is

, this equation is also often presented as

We now know exactly how the macroscopic properties of pressure (and density) is related to the microscopic property of the molecular motion (of godzillion number of gas particles)! Note that gas pressure is directly proportional to the mean-square speed of the gas particles (and not the average speed).