Earlier, we derived the formula for the internal energy of an ideal (monatomic) gas to be

However, many students through other readings often come across formulas such as

. So which formula is correct?

Well, those other variants are the formulas for diatomic or polyatomic gases. And the difference is due to this thing called the degree of freedom.

Let’s start from monatomic gases such as He, Neon and Argon, which consist of single atoms (instead of molecules). Single atoms are only capable of translational motion. As such, each atom is said to enjoy three degrees of freedom, since it is free to move in the x, y and z directions.

Then there is this thing called the equipartition principle, which says that in thermal equilibrium, the energy of a system is always distributed equally among all of its possible forms. In fact, the energy apportioned to each degree of freedom is

. Since each atom has three degrees of freedom, each atom must be allocated

of energy. The internal energy of a monatomic gas with N atoms is thus

This is in agreement with our derivation in section 11.3.5. Let’s move on to diatomic gases such as H2, N2 and O2.

of energy. The internal energy of a diatomic gas with N molecules is thus

Basically, the atoms oscillate as though they are connected by a spring. The equipartition principle dictates that equal share of energy must be allocated for the vibrational KE and PE. With seven degrees of freedom, the internal energy become

Polyatomic molecules have even more degrees of freedom compared to diatomic gases. For a start, they have three (instead of two) rotational degrees of freedom. They are also able to vibrate in many different modes. However, many of these modes are “switched on” only at higher temperature. So the formula for the internal energy of polyatomic gases is temperature dependent.

Let’s start with Cv. Since the gas is held at constant volume,

If the gas is monatomic,

Now onto Cp. If the gas is allowed to expand and do work,

If the gas is monatomic, 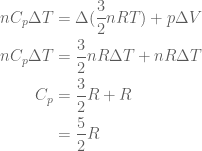 . The additional heat is required to offset the work done by the gas.

If the gas were diatomic, the only change we have to make to the above analysis is to substitute U

. It does not take much to work out that

The table below shows the actual molar heat capacities of some common gases. It is quite satisfying to see that the actual values match the theoretical predictions so closely.

The large values of Cv for the polyatomic gases are due to their need for rotational energy.

Ok. I hope you find this section interesting. But as far as the H2 syllabus is concerned, we are living in an ignorant but blissful world where U is always

. Having said that, when solving for ΔU during examinations, between

, always go with the first approach. This is because

is never wrong. On the other hand,