Let’s consider a system of two masses consisting of a massive body M and a small mass m separated by distance r. Let’s begin with them separated at infinite distance apart

and both at rest. By our choice of reference point, the GPE of this system is zero at this stage.

The small m is now accelerating towards M due to

, the gravitational pull M exerts on m. By the time m arrives at the point where

, it would have gained a certain amount of KE, thanks to the work done by the gravitational pull so far. This amount of KE can be derived from the area under the F–r graph between 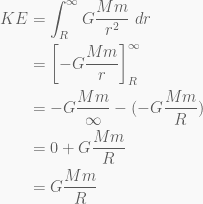 Now, this amount of KE gained is also the amount of GPE that has been lost due to the mass moving from

. Since the GPE when

Hence, the amount of GPE for two masses M1 and M2 at a distance d apart, is given bythe formula

The formula reminds us of the following points:

Who owns the GPE?

(where d is the centre-to-centre distance between M1 and M2) belongs to both M1 and M2 as a system. Gain/loss in GPE of the system will manifest as loss/gain in KE of both masses.

But if the two masses are very unequal in size, then we usually speak of

(where r is the distance of m from the centre of M) as if theGPE that belongs only to m. From Principle of Conservation of Momentum, we know that the change in M’s velocity is always negligible compared to the change in m’s velocity. So any loss/gain in the GPE of the system manifests completely as gain/loss of the KE of m only.